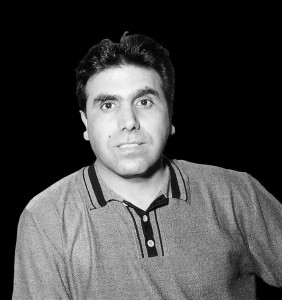 Hello, I am a Toronto based third generation artist, conservation expert and a contributing member of the Canadian Art Society since 1987. I hope you enjoy browsing through our various collections.

I was raised in an uncommon family environment; my father and grandfather were both established artists. To intensify matters, the nine boys in my family all became artists and so I accepted my fate and followed their footsteps.

As early as the age of five I started visiting my father’s studio, always arriving exhausted from the long walk into the heart of the city where the atelier was.I would watch the experts in awe for hours on end. I remember the sensation of being mesmerized while witnessing the creative process from a canvas that was crisp clean only a few hours before. Being saturated in art, I eventually began having my own artistic curiosities. Continuously observing my father and brothers techniques, I eventually built up enough confidence to start my own expression.

After years of informal teaching, I enrolled at the University of Tehran’s Art Faculty. At the University, I was initially taught art theory, through text and speech; I was impatient, having had many years of practical experience before enrolling.

It was only later that I realized that the teachings were having a subconscious effect on the natural motions of my hand. I continued to increase my painting skills, but was also drawn towards creating human sculptures. The sculptures helped me better understand the design of the human body which allowed me to paint them with additional ease.

During my studies, I met my wife who was also enrolled in Arts at the University. This encounter naturally shifted my influence which was largely focused on Classicism, to the more current European Romantic movement of the time. During the post-industrial revolution era, people were exploring rights and personal freedoms and this powered much of my work of the time.

In 1985, my wife and two kids travelled to West Germany, moving between Frankfurt and Cologne and following the art movement of the time. I frequented many exhibitions during this period and learned many things from the artists in Germany. After a year in Germany, we moved back to Tehran and I began creating artwork that was uncommon to the locals and in high in demand.

Shortly after my return to Tehran, there was a growing hindrance on the artistic movement. As this was a period of heightened creativity for me, it encouraged me to change location rather than viewpoint and so we decided to emigrate.

Our new adventure began in Spain where I began selling much of my work to local galleries. After six months, we decided to move to Los Angeles and stopped in Toronto in 1987 to visit friends. I knew only after a few days of interaction with the locals that we were going to stay in Toronto for good. We fell in love with the city – I should note that it was summer when we arrived, had it been winter, we may have carried on with our Californian dream!

We first settled into Scarborough village, which is half way between Guildwood and Bluffs Park. The scenic natural beauty of the community and environment are reflected in my works of the late eighties. I set up a little studio at our home and began consigning work to several galleries in the city, often commuting on foot along the shore line in contemplation. Some of the Galleries I first began working with were Canadian Imported Art, Hennok’s, Spectrum and Del Bolo Gallery. I will always be indebted to the owners and curators of these galleries for giving my work a chance and accelerating my career. During this period I also participated in many exhibitions and shows in the GTA to try to increase exposure.

During my visits to the various galleries, I was increasingly moved by Native Canadian art and so I began creating marble and soap stone carvings of the country’s native species.

Not being fixed to one medium or artistic style opened many doors for me and eventually allowed me to open my first Gallery in Etobicoke in 1989, at 3100 Lakeshore Blvd., near Kipling. The neighborhood at the time had a large influx of European settlers, and most of my commissioned paintings began to reflect the thoughts and memories of the locals and their homelands.

As demand and cliental grew, the Gallery moved to a larger space in Hogg’s Hollow, at 3417 Yonge St., near Lawrence in 1991. I continued to focus on services such as restoration and private commissions and began receiving many referrals from existing clients. Even today, I take my greatest pride in seeing a surprised client after completing a restoration project! After twenty-one great years, the gallery again moved to a larger location at the end of 2012. We made many great friends in Hogg’s hollow and the community will always be home to my family and I. My influence since has largely been on capturing Canadian landscapes –hours and hours of painting nature’s stillness and solitude and I am still amazed by this country’s natural beauty.

After close to 40 years of producing art and delivering services, I have many pieces and projects that are not shown on the site. As I have much more to share, I would invite you to contact me through the site or drop in for an in-person chat.

Learn more about our passion for the arts.

We offer a wide range of services under one roof.

There’s no better way than to see art in person.